Reality – No need to plan for it – It will happen anyway

“All forms of economic output – literally all of the goods and services which comprise the ‘real’ economy – are products of energy.

Nothing of any economic value or utility can be supplied without using energy. Energy can be defined as ‘a capacity for work’ and, historically, everything that we wanted or needed was produced using the labour (work) of humans and animals, plus some early application of the power of wind and water. That changed from the late 1700s when we learned how to deploy the vast reserves of energy contained in fossil fuel (FF) deposits of coal, oil and natural gas”.

A future of “Business as usual” is totally out of kilter with the real economy.  As is everything that is said about a  future based on the growth paradigm.

The real economy is evolving in ways hardly affected by any kind of construct.  Constructs created out of the imaginations of politicians, social scientists, bureaucrats, and other dreamers.

Yet those who create these constructs deny that they are peddling a virtual world.  And there is no way to convince them of this.

Which is not surprising when you understand how things are.

The reality is that we are now in an era of degrowth to a smaller economy and declining prosperity.

It is too late to stop global warming.

It makes sense to prepare ourselves as individuals, families, and organisations for what is to come.

The real economy of de-growth is heading in the following direction:

Professor William Rees has a comprehensive and convincing view of why societal collapse is inevitable.  This piece of his provides an example of his thinking.  He also explains why the establishment at large will never accept the reality of what will be.

The easiest to understand in today’s mindset is that the economy will be smaller.  Not just smaller than now, but getting smaller for the foreseeable future.

Those old enough to remember living in the 1950s and 60s, when the economy was much smaller may rather like the idea.   It was before mindless consumer-led growth got going.  When today’s discretionary markets and spending hardly existed,  Government-funded so-called “National Restaurants” were the only places to eat out – if you could bear tasteless mince of dubious origin. You could get to almost anywhere by train.

The big difference I now realise was how slow daily life was.  Slow busyness.

We are on a journey.   No need to plan it.  We will get taken by the evolving real economy.
But we don’t yet know how fast the economy will shrink.  It will probably depend on how the Government reacts when it realises what is happening.

Since writing this I have been made aware of the Seneca cliff which, if it turns out to be the shape of the shrinkage, will be more of a problem on our journey into the future. 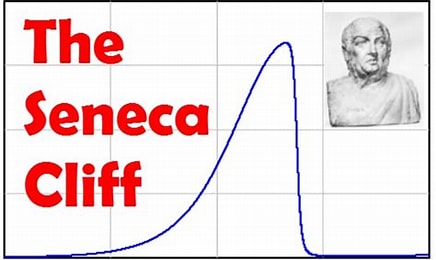 This entry was posted in de-growth, economy, General and tagged planning. Bookmark the permalink.